Stacking The Shelves Hosted by Tynga's Reviews,  Sunday Post Hosted by Caffeinated Book Reviewer and Showcase Sunday Hosted by Books, Biscuits and Tea.
My Month:
Hi Everyone. Wow what a crazy month in our household. Had two friends funerals, a wedding and a 1st birthday party for our grandson Roman at our house. I can not believe Roman has turned 1 already (on May 8th). He always puts a smile on our faces. Look how sweet our little man is. How can one not smile when they see his precious face.
Roman at Home Depot. Really just went to get paint and could of used the regular cart. But I wanted him to enjoy the Car Cart. The cart is huge but he enjoyed it. 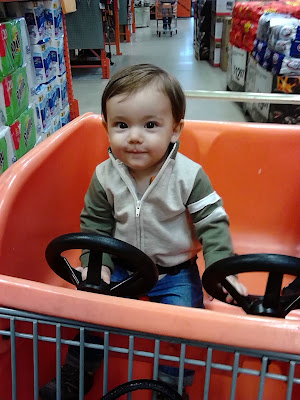 Enjoying his new Revamped Little Tykes Batmobile (bought at a garage sale $8.00) from his cool grandma (me) 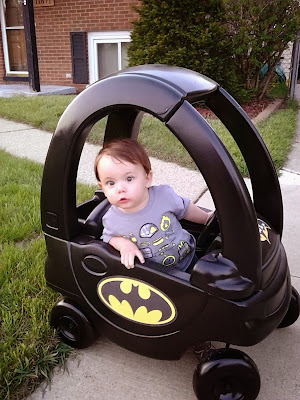 I read The Recruit (Highland Guard #6) a while back and fell in love with it. I knew I wanted to start from the beginning of Highland guard series but bought all of them used PB. Lately I have not been reading my PB. I seem to prefer my kindle and was in the mood to start this series so I borrowed e-book through our public library. 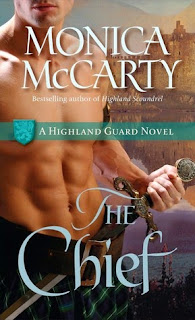 The Chief (Highland Guard #1)
by Monica McCarty
Synopsis
AN ELITE FIGHTING FORCE UNLIKE THE WORLD HAS EVER SEEN . . .

Scouring the darkest corners of the Highlands and Western Isles, Robert the Bruce handpicks ten warriors to help him in his quest to free Scotland from English rule. They are the best of the best, chosen for their superior skills in each discipline of warfare. And to lead his secret Highland Guard, Bruce chooses the greatest warrior of all.

The ultimate Highland warlord and a swordsman without equal, Tor MacLeod has no intention of being drawn into Scotland’s war against the English. Dedicated to his clan, the fiercely independent chief answers to no one—especially not to his alluring new bride, bartered to him in a bid to secure his command of the deadliest fighting force the world has ever seen. The treacherous chit who made her way to Tor’s bed may have won his hand, but she will never claim his heart.

Although her husband’s reputation is as fierce as his manner, Christina Fraser believes that something softer hides beneath his brutal shell. But the only warmth she feels is in their bed, in glorious moments of white-hot desire that disappear with the dawn. When Christina’s reckless bid to win her husband’s love goes awry and thrusts them into danger on the eve of war, Tor will face his ultimate battle: to save his wife and to open his heart—before it’s too late.