ARC Review: His Risk To Take by Tessa Bailey 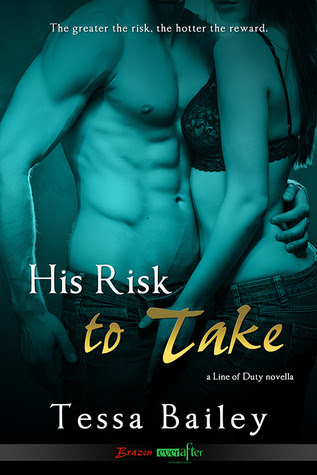 The greater the risk, the hotter the reward…

Homicide cop Troy Bennett had a reputation on the Chicago PD for being fearless and in control—until the night his daredevil partner is killed during a raid. From that moment on, he swears he’ll never again be responsible for the loss of a loved one. To escape his demons, Troy transfers to the NYPD, bringing him up close and personal with Ruby Elliott, a beautiful, street-savvy pool hustler.

Reckless and stubbornly independent, Ruby embodies everything Troy’s avoiding, but when she walks into O’Hanlon’s Pub and blows his carefully laid plans to hell, Troy knows he has to have her—risks be damned. But there’s a connection between Ruby’s shadowed past and a case Troy’s working involving a notorious Brooklyn felon, throwing her safety into jeopardy. Confronted with his biggest fear, will Troy push Ruby away to keep her safe or fight to keep her in his arms where she belongs?

Love it when I find a novel that I instantly fall in love with the characters right from the beginning. Ruby had me with her straight forward personality.

"So, blues eyes. Why don't you stop staring and buy me a drink? I don't want to dehydrate before you work up the nerve."

Troy had me with his fun comeback.

Unable to help himself, he leaned closer. Too Close. "Ask nicely, and I'll think about it."
Troy and Ruby are so opposite but then they are perfect for each other. She is a pool hustler that loves to challenge him. He is sexy dominate cop that he does not know if he wants to kiss her or tie her to the bed with her bad decisions that ends up putting her in danger. They were so fun together, he never new what she was up to. Their journey is not always smooth as she has built a wall inside and will not let him in. Everyone that she has loved and let in have left her. He wants in and feels she does not trust him enough to let him in. I was rooting for them to have their happy ending. They are need-a-cold-shower steamy together and I do not think I could ever look at a pool stick with out thinking of Troy and Ruby. The sexual tension left me hot and bothered with a sexy dirty-talking Troy.
Ruby couldn't stop herself from backing up, bringing her body flush against his. Troy hummed in satisfaction at her boldness. "Next time you bend over a table, I'm going to wrap all that hair around my fist and pull your head back. I want to watch your eyes glaze over when I fuck you into oblivion."
Ruby has never begged or second guess anything, but one night with Troy has her doing both. Troy has all the traits I love in my heroes. He is sweet, possessive, jealous with an alpha male attitude that plays dirty in the bedroom.
"I protect what's mine. Are you denying that you're mine Ruby? I'd seriously advise against it."
His Risk To Take is a sexy read that matches its sexy cover. This is the second novel in the series and can be a stand alone read.   Tessa Bailey has found herself  a new fan. I want more of her sexy dominate cops in her Line Of Duty series.
ARC provided by Entangled Publishing: Brazen at NetGalley for an honest review.