Lusting For Covers: Rogue With A Brogue by Suzanne Enoch

Lusting for Covers is a weekly meme, held on Sunday, that allows bloggers to share their current cover obsession with fellow book lovers. This meme is hosted by TBQ @ TBQ’s Book Palace.
My candidate:
A Rogue For Every Lady

London, 1817: Stuck in a Mayfair ballroom, thanks to his lovestruck brother, Highlander Arran MacLawry wants nothing but a bit of distraction from an arranged betrothal—and a clever auburn-haired lass in a vixen's mask promises just that . . . until he discovers that she's the granddaughter of the Campbell, chief of clan MacLawry's longtime rival. Despite their families' grudging truce, falling for fiery Mary Campbell is a notion too outlandish even for this Highlander…

The Thrill Of The Forbidden

Raised on tales of savage MacLawrys, Mary is stunned to realize the impressively strapping man in the fox's mask is one of them. Surely the enemy shouldn't have such a broad chest, and such a seductive brogue? Not that her curiosity matters—any dalliance between them is strictly forbidden, and she's promised to another. But with the crackling spark between them ready to catch flame, love is worth every risk… 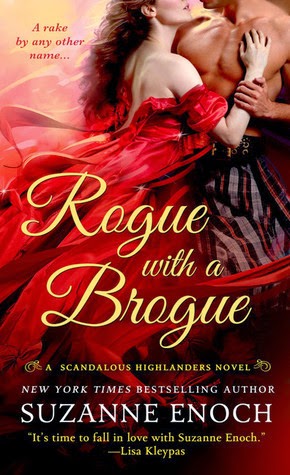 Thoughts:
In the mood for a sexy highlander this week. Love the dress flowing, vibrant red and stance of the couple. This is book 2 in Scandalous Highlander series. Love all the covers but this is my favorite. Thank you Addicted to Romance for recommended The Devil Wears Kilts (Scandalous Highlanders #1) .
Posted by JoLee @ Wickedly Delicious Book Blog
Email ThisBlogThis!Share to TwitterShare to FacebookShare to Pinterest
Labels: Historical Romance, Lusting For Covers meme