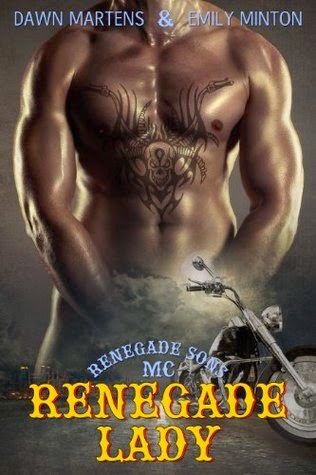 Renegade Lady (Renegade Sons MC #1)
by Dawn Martens & Emily Minton
Synopsis
Jenna “Ice” Chandler grew up as part of a motorcycle club. She considered it her home, until one wrong move made it her prison. After months of abuse, she is rescued by Chipper, who takes her to Big Clifty, Missouri, home of the Renegade Sons MC.

Kiddrick “Kidd” Jones is the president of the Renegades. He knows there is something special about Ice the moment his older brother, Chipper, brings her into the club, but stays away, because she is too young.

When time comes for Ice to take her place in the club, she has two choices, become an old lady or a club whore. Not believing in love and knowing a man can never be faithful, she decides to earn her spot on her back.

With each passing year, Kidd's feelings for Ice grows and the urge to make her his becomes stronger. Frustrated and jealous, he finally decides it’s time to make her his.

Will Ice finally thaw out and give love a chance, or is Kidd fighting a losing battle?

WARNING: Renegade Lady contains adult situations some readers may find offensive. This is a raw and gritty story involving explicit sex, graphic language, violence and drug use. Not intended for readers under 18. Join us every Monday and share a favorite quote that's grabbed ya for one reason or another.
Everyone's welcome to join in. Authors, bloggers, readers. The more the merrier! Herding Cats & Burning Soup

My Quote-tastic:
"If you give me your heart, lay it right in my hands. I promise I will protect it until the day I die."  ~ Kidd
Review:
Genre: Contemporary Romance
Rating: 3 out 5 Stars ~ Liked It
Heat Rating: Hot ~ Fan Your self
Biker reads are my weakness. I get all giddy when I dive into it. Then I get even more giddy when it starts off gritty, raw and flows smoothly. Well Renegade started out that way for me but at some point it started to fall flat. I was fine with that as I was still able to enjoy the story.
I loved both the heroine Jenna “Ice” Chandler  and the hero Kiddrick “Kidd” Jones. Their relationship started out as friends first because of her young age. He knew he had to wait till she turned 18 to make his move. They became best friends. But over the years Kidd has became stand offish so he would not do something he regrets before she turned legal. Over years their relationship has gotten bumpy. Both H/h are strong will characters and loved that about them. She has a grueling past and broke my heart to read about. But it was gritty, well written and played out smoothly. Loved Kidd and all his alpha male traits but even what was better, that he was still a softy inside when it came to Jenna. He was not over the top where he changes because he still had his alpha male attitude through out the book.
I did have a few issues one being about an incident with club business that left readers hanging but then finally got picked backed up 8 years later. In between that time additional drama with Club business was added to mix of things. I would of prefer finishing some stuff up before adding more to the club business. I adore the relationship part in Renegade Lady just not so much the club business part. I really had a hard time connecting with that part.
The secondary characters I enjoyed and have perked my interest where I want to know what direction they all will be going. Chipper I adored and my heart broke for him. I look forward to reading Renegade Reject (Renegade Sons MC #2) Daisy and Preach novel.
I  am happy that I am able to add Renegade Sons MC series to my list of Biker Romance worth reading.  These are my favorite series so far Reapers MC by Joanna Wylde,  Undeniable by Madeline Sheehan,  The Aces by Nicole Jacquelyn and Chaos by Kristen Ashley.
Add to Goodreads
Purchase Links: Amazon
Posted by JoLee @ Wickedly Delicious Book Blog
Email ThisBlogThis!Share to TwitterShare to FacebookShare to Pinterest
Labels: Contemporary Romance, Dawn Martens, Quote Tastic Meme, Reviews