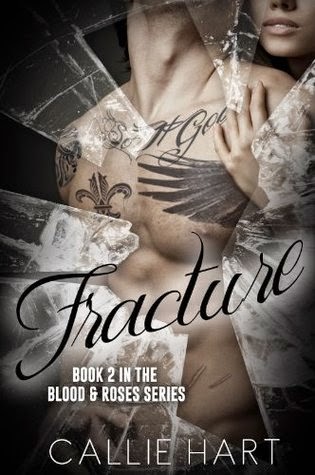 Fracture (Blood & Roses #2)
by Callie Hart
Synopsis
Zeth Mayfair is pretty much the very last thing I need in my life. And yet with every breath I take he becomes more engrained in every aspect of it:

He has a key to my house.

He knows where I work.

He dumped his strange, mentally traumatized housemate on my doorstep and has driven off into the sunset in search of my missing sister.

I want to forget him. Want to change the locks and blot out his face, scourge his very name from my memory. The problem is that I also need him. I need him more than I need air to breath, and I can’t be without him now.

Rating: 4 stars - Loved It
Genre: Erotic Romance
Heat: Scorcher - Panty Changer
Could not wait to dive into Fracture after enjoying Deviant. Once again Callie Hart delivered a great read. Fracture is a wonderful follow up to her Blood & Roses series with all characters having their own personality and voice.
Fracture we get more of the plot of her sister disappearance. I am falling hard for Zeth as readers get more background on his past also get more on what his life is in the present. Of course Callie Hart delivered yet some Panty-Changer sex scenes that are not repetitive with a dirty talking hero. Callie Hart imagination in the bedroom department is startling. It is more shocking that I find my self loving it all. Once again her scenes are never drawn out always just enough for me. Now Zeth that guy is so dark and twisted he scares me sometimes. Lets say I will never look at paperclips again with out thinking of him. I would never want to tick him off or be on the other end of his wrath when getting info. Now he would never hurt Sloane or Lacey his strange, mentally traumatized roommate.
Lacey character I find interesting. The little bit of backstory on her past broke my heart. Her character is developing more in this series.  It does help break up of just having Zeth and Sloane. It was nice seeing Sloane and Lacey having some one on one time even if Lacey was basically dropped off at her doorstep with out having a say about it. The surprise twist with Lacey I did not see coming. I was so engrossed in the story the twist did not even crossed my mind.
I am ready for Burn (Blood & Roses #3).
Add To Goodreads
Purchase Link: Amazon